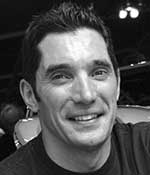 After starting in Formula 3000, was a test driver for the Lotus F1 team in ’94, then ran seven F1 races for the underfinanced Footwork team in ’95. Moved to CART in ’96 to replace Jeff Krosnoff who was killed in Toronto. Ran three years for Team Rahal (’99-’01). Scored 11 top-five finishes in ’99 and was fifth in the championship. Won at Portland and Laguna Seca in ’01 to place sixth in the CART points. Ran mostly sports cars from ’01, but also ran Indy 500 for Cheever Racing in ’02 and ’06. Competed in the 24 Hours of LeMans seven times logging a pair of second-in-class finishes with Corvette Racing (’04 and ’05). Was second in the ’96 Rolex 24 at Daytona where he earned the “Mad Max” handle for his torrid pace with a damaged racecar in his final stint. Drove in NASCAR Busch Series for McGill Motorsports in ’06 and ’07.