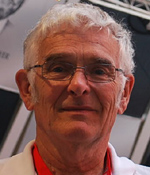 Began SCCA club racing in ’62 and was twice crowned National Champion. Qualified for the first-ever Runoffs in ’64 (Riverside) in a C Production Lotus Super 7. Went to a Yenko Stinger in ’66 winning the D Prod National Championship in it the following year at Daytona. Ran Corvettes in both A and B Prod from ’68 through ’70, taking the A Prod National title in ’69 at Daytona. In ’70, he was fourth in the Daytona 24. Ran Trans-Am and IMSA ’71-’75 and ’81-’87, often co-driving with Don Yenko, Dave Heinz and Tony DeLorenzo. Thompson continues racing today, driving an RX-7 in SCCA enduros.