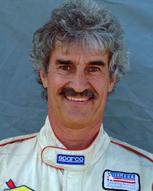 Began writing about the sport while at school in England in 1974….has remained a contributor to Autosport magazine to this day….moved to the U.S. in 1985 to become Editorial Director of On Track magazine….edited the Autocourse CART/Champ Car Official Yearbook and provided the English language international television commentary for the CART/Champ Car World Series from 1994 to 2007….currently announces for the American Le Mans Series Radio network….founded the Team USA Scholarship as a means of helping young American race car drivers in 1990….organized the RRDC’s first West Coast dinner (honoring Dan Gurney) as part of the Grand Prix of Long Beach in 2009, and is hosting the “SAFE is FAST” RRDC/FIA Young Driver Symposiums….has raced himself in a variety of cars and series since 1978….highlights have included a lap record at Oulton Park, overtaking David Hobbs during the 1983 Tourist Trophy at Silverstone (“he won’t remember but I do!”)….clinching the Manufacturers Championship for Jeep in the 1987 SCCA Racetruck Challenge with a fifth-place finish (plus fastest race lap after starting from pole) in the season finale at St. Petersburg….and winning the Masters class during Pacific F2000 Championship races in 2006 and 2007.