The April 12 RRDC Evening with Johnny Rutherford Presented by Firestone was held in front of a capacity crowd of auto racing dignitaries, corporate executives and champion race-car drivers, as the three-time Indy 500 champion was honored by the Road Racing Drivers Club, prior to the running of the 44th Toyota Grand Prix of Long Beach. 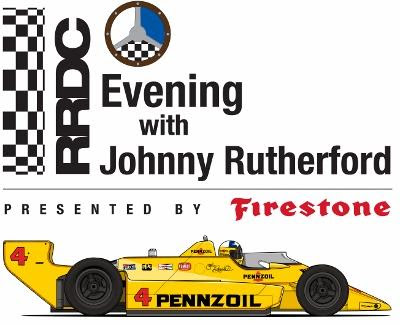 In the audience were representatives from the Verizon IndyCar Series, the Indianapolis 500, the IMSA WeatherTech Sports Car Championship, Pirelli World Challenge, and a number of Historic Trans-Am drivers who are racing on the streets of Long Beach this weekend for the first time.

Gurney, who would have turned 87 today, passed away earlier this year. A special tribute video, narrated by TV commentator Bob Varsha, was shown commemorating the American racing legend’s remarkable legacy in the sport.

Rutherford’s path through his extraordinary career was captured in a short video written and voiced by Sam Posey. Another congratulatory video, from McLaren Racing’s CEO Zak Brown, showed Brown standing in front of the McLaren M16 that Rutherford drove to his 1974 Indy 500 win, on display at McLaren’s headquarters in Woking, Surrey, England. RRDC President Bobby Rahal then “interrogated” Rutherford on his legendary achievements in the style of “Late Night with David Letterman.”

Rahal covered the gamut of Rutherford’s career, from his early days racing modified stock cars in 1959, his USAC championship era, plus his time racing sports cars in the ’70s. Among other marques, he competed in a Ferrari, a Corvette, and a Porsche 934 for Dick Barbour Racing, and scored a second-place finish at the 1978 Daytona 24-Hour in a Porsche 935. 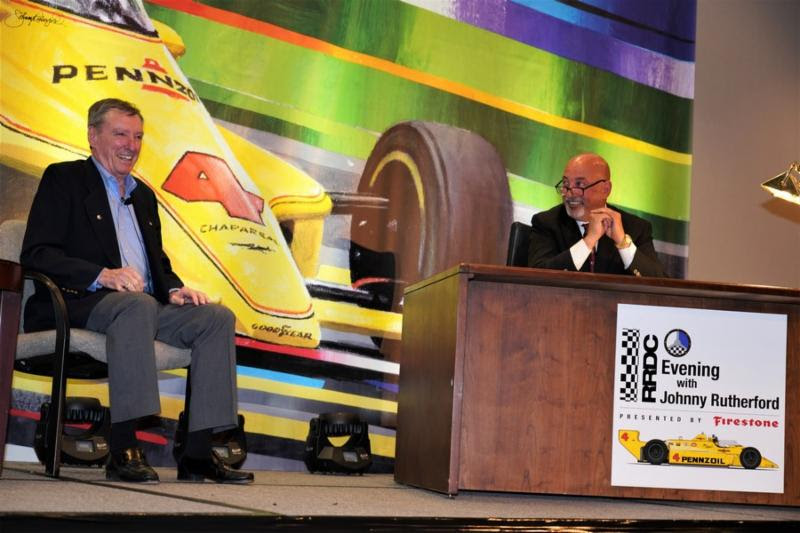 Johnny Rutherford is grilled by RRDC President and host Bobby Rahal. Both enjoyed the exchange as much as the audience of peers. [Albert Wong image]

“Johnny is the consummate professional, a hell of a race car driver, but more of a gentleman, and a tremendous ambassador for the sport of motor racing,” said Rahal. “The guy is just first class in everything he’s done. He was very public and he respected all of us drivers. He really was a complete package, so it’s great that we were able to recognize him tonight.”

On receiving this honor, Rutherford said, “It’s a genuine thrill. I never would have thought that I would have risen in the ranks to earn this. I’m just a guy from Texas that wanted to drive race cars, on the dirt mostly back then, so it was different. But I enjoyed my road racing, and I’m thrilled to death to be considered for this honor.”

Mario Andretti, the 2014 RRDC honoree, said of his friend and fellow competitor, “He is so deserving to be recognized among the racers here. He’s had a fabulous career. He is very versatile and is just one of the good guys in our sport. Not just because of his record but also as a friend. Johnny is one of us, for sure, big time. He’s a racer.”

On behalf of Firestone Racing, which has been the presenting sponsor of the RRDC Evenings for nine years, Lisa Boggs, Director, Bridgestone Americas Motorsports, said, “Tonight’s honoree, ‘Lone Star JR’, exemplifies the best of our sport…a true gentleman and an ambassador off the track. Congratulations; a well-deserved honor.”

Featured on the patio during the cocktail reception sponsored by American Honda were the Offenhauser-powered Silnes/Meskowski chassis, from the Malloy Foundation, in which Rutherford made his Championship Car debut in 1962, the McLaren M16E in which he finished second at the Indy 500 in ’75, and his Indy 500-winning Chaparral 2K from 1980. The McLaren and Chaparral were on loan from the Indianapolis Motor Speedway Museum. 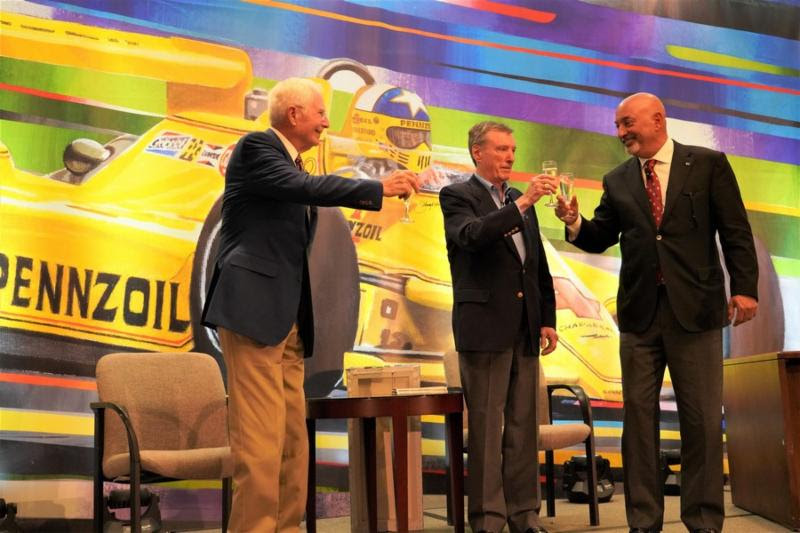 An original painting by acclaimed artist Randy Owens depicting Lone Star JR’s third Indy 500 win in 1980 in the Chaparral 2K, nicknamed the “Yellow Submarine,” was presented to Rutherford by Owens. A giclee print of the painting, signed by champion drivers and other racing legends attending the dinner, along with a 25-foot-long backdrop of the painting, were included in a silent auction.

The dinner’s proceeds help support the RRDC’s young driver initiatives, including its groundbreaking SAFEisFAST.com presented by Honda program, and the Team USA Scholarship, which the RRDC has backed since 1997. Team USA is celebrating its 27th anniversary this year.